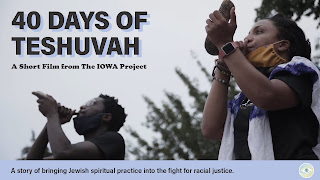 Our community presented and discussed the short film 40 Days of Teshuvah on the afternoon of Tisha b'Av. The film chronicles 40 days of protests that Black Jewish activist Yehudah Webster led  on Grand Army Plaza in Brooklyn after the murder of George Floyd in 2020, concluding on Tisha b'Av.

During and after our screening and discussion, several questions came up:

Are there Black Jews in any significant number? Yes. The subtext may have been “Are they really Jewish?” Yes to that as well. While there are some “Black Hebrews” whose Jewishness is questioned, Black Jews like Yehudah Webster and many of his generation are the children or grandchildren of Black Americans who undertook legitimate conversion to Judaism, often under Orthodox auspices. It’s estimated than 1 in 5 American Jews is a person of color.

Is there really any connection between Tisha b’Av and Black Lives Matter? There are two themes of Tisha b’Av. The first is grief: our grief over the destruction of the Temples, the destruction of Jerusalem, the exile of our people, and the sufferings of Jews throughout the ages. From the liberal end of the Jewish spectrum, I don’t mourn for the Temple, because I believe that we are better off with a Judaism that doesn’t revolve around animal sacrifice. I identify more with the people’s suffering that we read about in Eicha (Lamentations).

The second theme is the cause of the destruction. Although Jewish tradition naturally holds that Jerusalem was destroyed because of our sins, the sages didn’t emphasize the so-called ritual infractions to which our minds naturally leap. They identified the cause as sinat hinam, baseless hatred. In our time, in our country, the non-judicial execution of Black Americans for offenses that are not even capital crimes is the paramount example of baseless
hatred—and our taxes pay for it.

Is “crying out to God” as we saw in the demonstrations on Grand Army Plaza enough?” No. But is it worthwhile? The Torah tells us that when we were enslaved in Egypt, “God heard the cries of the people” and then God acted to liberate them, so I have to believe that public outcry is legitimate.

But crying out to God is not sufficient. Unlike our ancestors in Egypt, we have means to effect change. I’ve been thinking about some additions to Al Het for Yom Kippur:

One aspect of the film that was probably  hard to accept was the emphasis that Yehudah Webster and his family, and Rabbi David Jaffe, placed on prayer, especially public prayer. We are less certain about prayer and, in general, about relationship with God, but that’s a major strand in Jewish thought. In Rabbi Oren Steinitz’s Talmud class, we’ve been studying tractate Ta’anit, which is about fast days—specifically, fasting during drought. Taking the Torah to the public square, praying and blowing the shofar there, were among the steps they took. Are Black lives less important than rain?

One Jewish thing to save the earth

If it would slow climate change and help the environment in general, would you be willing to accept minimal packaging of everything you purc...